Valentine's Day... What's it All About?

So, Valentine's Day. A favourite celebration for the romantics amongst us. I don't mind admitting that I got a little mushy when a bouquet of flowers and some of my favourite wine and chocolates appeared in front of me this morning, courtesy of my Mr Marren!

But though this special day certainly didn't appear out of nowhere, as with many long-standing traditions, it's not 100% clear exactly how or when this all started. So I did a bit of digging around and found a few potential scenarios... 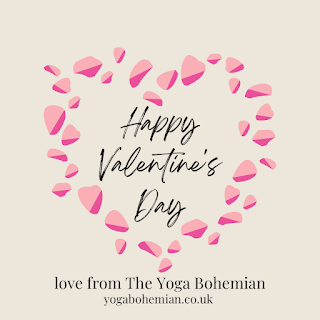 If you've ever asked yourself that question, let me tell you all about the Pagan Roman festival of LUPERCALIA.

This celebration took place in Ancient Rome at the Ides of February (15th February). It was the festival of Faunus, god of agriculture and Romulus and Remus, the founders of Rome. It celebrated the coming of spring and contained important fertility rites amongst the Roman people.

Priests of the Luperci order would gather at the sacred cave of Romulus and Remus to make sacrifice of a goat and a dog (goat for fertility and dog for purification). The hide of the goat would be cut into strips and soaked in the sacrificial blood and used to make ritual offerings to the fields and land. Afterwards, the women would come, eager to be slapped with the blood-soaked strips to promote their own fertility for the coming year. Next, their names would be placed in an urn and any eligible bachelors could choose one at random and be paired with that woman for the rest of the year. This would often end up in marriage or permanent partnership.

But of course, by the end of the 5th Century, Lupercalia was deemed "un-Christian" and was outlawed as a completely inappropriate Pagan practice.

Noel Lenski, historian at the University of Colorado at Boulder wrote:

"It was little more of a drunken revel, but the Christians put clothes back on it. That didn't stop it from being a day of fertility and love."

Lenski suggests that because Lupercalia was so popular amongst the Pagans, The Church was going to have a hard time making them let go of it so instead they simply had to concede and make it into a Christian celebration.

In the time of Emperor Claudius II (c. 268-270 AD), it was decided that the best soldiers were single men rather than married ones so many young men were forced to join the army against their will. Legend has it that a sympathetic Christian Priest defied the Emperor by performing secret marriages amongst the young lovers of the city to save them from their military fate. The Priest was called Valentine.

Another tale tells of a Priest who was helping fellow Christians escape from the rather brutal Roman prisons. When he was caught and thrown in prison himself, he was visited by the jailer's daughter and they fell in love. Guess what his name was? You've got it! Before his death, he wrote his love a letter. He signed off "from your Valentine," a phrase poignantly still used to this day.

There is also a legend linked to a St. Valentine, Bishop of Terni who lived around the same time. He performed some amazing healing miracles resulting in the conversion to Christianity of several scholars and their families surrounding the incident. Unfortunately, he is said to have been later beheaded by Emperor Claudius II for his troubles.

It is possible, even probable, that these three Valentines were one and the same person but whether that be the case or not, in all accounts, the legendary martyr St Valentine was portrayed as a romantic, courageous and heroic character.

A few centuries later, The Normans celebrated GALATIN'S DAY around the same time of year as the Lupercalia Festival. Galatin, meaning 'lover of women,' sounds suspiciously like Valentine and it is possible the two names had, by process of "Chinese whispers" over the distance of land and time, become confused and conflated.

Fast forward into the Middle Ages and the time of Mid-February was observed to be the start of the birds' mating season, making birds an apt symbol of love and fertility, linking again with the coming of the springtime and turning our own thoughts towards 'the birds and the bees.'

Our very own Geoff Chaucer was the first to write about the day by name in his poem Parliament of Foules:

And of course, William Shakespeare would never be left out of the poem party, adding it as a reference in a rather bawdy-sounding poem in his masterpiece, Hamlet...

A rather poignant reference to the day in history is the origin of the first recorded Valentine's card. It was sent in 1415 from the Charles, Duke of Orléans to his 16 year old wife. It sounds quite sweet until you find out that he sent it from his cell in the Tower of London where he was imprisoned following his defeat in Agincourt. The poem reads:

"My very gentle valentine / Since for me you were born too soon / And I for you was born too late. / God forgives him who has estranged / Me from you for the whole year. / I am already sick of love, / My very gentle Valentine."

Charles never got to see his wife's reaction to his sombre love note as she died before he ever made it back to her.

So, whether it came from a wild party, an observation of nature, a poem or a tragic love story ending in execution, its easy to see why this celebration has such a long-lasting hold over us. Love is a connecting force that has existed between humans for countless thousands of years. The concept of showing love and affection by showering each other with gifts and loving gestures is something that, quite simply, comes naturally to us! And it's something we all enjoy, too - whether we like to admit it or not!
References:
britannica.com
history.com
npr.org
nationalgeographic.com
history.com
*I'll leave the rest of the poem here, if you're interested >.<

OPHELIA
Pray you, let's have no words of this; but when they
ask you what it means, say you this:

To-morrow is Saint Valentine's day,
All in the morning betime,
And I a maid at your window,
To be your Valentine.
Then up he rose, and donn'd his clothes,
And dupp'd the chamber-door;
Let in the maid, that out a maid
Never departed more.

By Gis and by Saint Charity,
Alack, and fie for shame!
Young men will do't, if they come to't;
By cock, they are to blame.
Quoth she, before you tumbled me,
You promised me to wed.
So would I ha' done, by yonder sun,
An thou hadst not come to my bed.

Popular posts from this blog

A Mantra For All: Sarve Bhavantu Sukhinah...

August 09, 2021
Hi! 🌙 So, lots of people have been asking me about the mantra I often chant at the end of practice.  It's very rare for me to end a practice without some kind of mantra these days and I often choose mantras that have some kind of bearing upon the specific practice we are doing or even the time of year. For me, the closing mantra rounds off the practice and indicates a kind of "seal" for the energy created during the session. As my practice has deepened and my teaching has developed, the use of mantra has become an integral part of the process and is as important to me as the postures themselves.   I love using Sanskrit mantras for many reasons. Firstly, because I love the sound of this language and it really makes me feel connected to the heritage of this wonderful practice of yoga. I think it is important to keep the roots and the reasons for practising yoga at the forefront of this practice otherwise it just becomes the performance of a series of complicated movements
Post a Comment
Read more

January 27, 2021
Hi! 🌙 So this year's Lunar splendour kicks off with the Wolf Moon, also known as The Cold Moon for obvious reasons! In times gone by, the full moons have been named according to the seasons, the weather or even the behaviour of nature or humankind around that time. The Wolf Moon , it is said, is so called because in the Northern Hemisphere, this is a time when wolves can often be heard howling more than usual. The old-timers thought it was maybe because of hunger but we now know that wolves howl for many other reasons: defining territory, to locate pack members and even to reinforce social bonds!  The Hopi Native American tribe are said to have named this moon PAAMUYA which means "Moon of Life at its Height" as a comparison to the summer sun which is exactly 6 months away at the opposite high point of the year. The moon rides high in the sky at this time of year (in the Northern Hemisphere) just like the sun in the height of Summer. Because of the various astrological h
1 comment
Read more

February 01, 2021
Hi! 🌙 So, the wheel of the year keeps turning...  I heard that if it's a bright, sunny day, that means the Cailleach can go out and fetch more firewood to keep her warm so she can keep winter going for a bit longer, but if she forgets and oversleeps, the day will be gray and stormy, therefore signalling an end to the cold days - well, today was a beautiful sunny day here (though cold) so I am assuming we need to snuggle up and keep hibernating a little longer! The Cailleach - she's known as The Veiled One and The Queen of Winter. She's a hag and, in some legends, a shapeshifter. She's a powerful old woman, filled with the wisdom of the ages, the ancients and the ancestors. Her skin is deathly pale and her teeth are red. She can leap across mountains and ride the storms. She's a true force of nature, wild and destructive but not evil. She cares for animals both wild and domestic during the winter and is the patron of wolves.  The Cailleach is ageless and immortal a
Post a Comment
Read more